The Science Policy Group at the University of California, San Francisco

By Dai Horiuchi, PhD and Bradley Webb, PhD, co-leaders of the Science Advocacy Subgroup and organizing members of the Science Policy Group at the  University of California, San Francisco (a Research!America member). 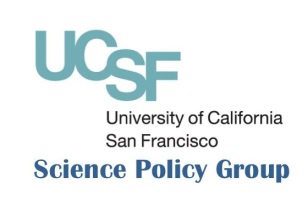 The Science Policy Group (SPG) at the University of California, San Francisco (UCSF) is determined to take advantage of this crisis situation brought about by the sequester to speak up for the future of academic biomedical science in America.  We’re composed of a dedicated group of life sciences graduate students and postdoctoral scholars. Our primary mission is to educate ourselves as well as the general public about policy issues and to take actions for the advancement of science and human health.  The SPG is composed of five subgroups; Science Advocacy, Science Education, Science Outreach, Science Reform, and Health Care Reform. The Advocacy Subgroup was formed in response to the sequester, the across-the-board budget cut, which has significantly decreased scientific funding since it went into effect earlier this year. It appeared that only those PIs and postdoctoral scholars whose federal grant applications (i.e. RO1s, K-awards, etc) were under consideration were aware of the potential consequences of the sequester. However, a majority of trainees had no knowledge of what the sequester entailed. It was not until grant applicants were unusually delayed and an abnormal number of grants, scholarships and fellowships were denied funding that people started paying attention.

The sequester has only been in effect for a short time but we are already feeling its negative repercussions.  We have observed a number of our postdoctoral colleagues leave UCSF due to the budgetary constraints both they and their PIs were experiencing.  The immediate consequences, such as sudden lay-offs and premature termination of promising research careers, are obviously tragic. However, the long-term repercussions have the potential to be even more devastating. We risk losing an entire generation of researchers from the negative financial and psychological environment. An increasing number of highly talented trainees are making the conscious decision to leave academia. They often cite one specific reason – the lack of financial support.  Further, an increasing number of established researchers are relocating to other countries where the governments are eager to invest in the future of their science. Discoveries that would have been made in the U.S. will now be made in Europe or Asia instead.  The impact of this could be devastating to the future of America.

What can we do to reverse this trend among trainees in order to secure the next generation of academic biomedical scientists? We have come to a conclusion that, first and foremost, we in academic science have to educate ourselves about what is at stake and become our own strongest advocates. Since our inception 8 months ago, the SPG at UCSF is dedicated to the goal. To this end we have hosted seminars to educate the UCSF community in science policy and advocacy. We have written to Congressmen and Congresswomen in an attempt to have our voices heard and have sent our representatives to Washington to participate in UC Day on Capitol Hill. In the coming year, we will continue educating ourselves and others in the UCSF community and will be reaching out to other institutions and to the general public by utilizing traditional as well as on-line media. We recognize what’s at stake in this budget-cutting political environment.  That’s why we’re stepping up our advocacy to stop sequestration before it dismantles our nation’s research ecosystem.