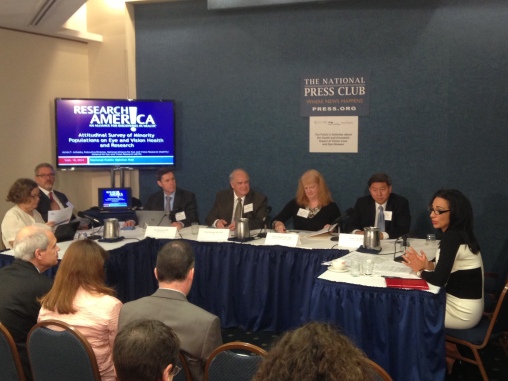 America’s minority populations are united in the view that not only is eye and vision research very important and needs to be a national priority, but many feel that current federal funding ($2.10 per person, per year) is not enough and should be increased. This may stem from the evidence that most minority populations recognize to some degree that individuals have different risks of eye disease depending on their ethnic heritage.

And while these Americans rate losing their eyesight as having the greatest impact on their daily life and having a significant impact on their independence, productivity and overall quality of life, 50 percent of Americans who suffer from an eye-related disease are not aware of it.

These statics and more were the topic of discussion at a press event in Washington, D.C., today, where members of the media and leaders in the eye and vision research community gathered to interact with a panel of experts and weigh in on the topic of The Public’s Attitudes about the Health and Economic Impact of Vision Loss and Eye Disease.

The focus of the panel was to take an in-depth look at data from a new national public opinion poll commissioned by Reasearch!America and the Alliance for Eye and Vision Research (AEVR), and supported by Research to Prevent Blindness which explored various perspectives among racial and ethnic groups regarding eye and vision health.

“This is the most rigorous study to date of the minority population and their attitudes toward vision and vision loss,” said James Jorkasky, executive director, AEVR.

Michelle Miller, CBS correspondent and moderator of the panel, pointed out that the poll findings supported that, regardless of ethnicity, America as a whole is in favor of supporting vision research.

“When it comes to eye health, we are all on the same page,” observed Miller.

Panelist Neil Bressler, M.D., chief of the Retina Division of the Wilmer Eye Institute at Johns Hopkins University School of Medicine, said that the poll confirms that Americans value their vision and how it impacts their quality of life. He added many people with eye disease are not aware of the treatments available to them. The topic then transitioned to the issue that is on everyone’s mind, the consequences of decreased federal funding , in particular, how this could slow momentum in research to improve the prevention and treatment of eye disorders.

Paul Sieving, M.D., Ph.D., director of the National Eye Institute (NEI) and a panelist, shared that the vast majority of the money that goes to the eye research community is channeled through NEI. He continued that, while philanthropy does make a difference, the core funding has to come from the NEI budget to effectively support these research efforts. The NEI’s current budget of $700 million is prioritized by both the incidence and prevalence of diseases, as well as the future direction of research.

The constraints of the current budget were even more obvious to attendees than ever, as just the day before the House approved a continuing resolution that essentially flat-funds federal agency budgets in FY15.

Panelist Karla Zadnik, O.D., Ph.D., dean of The Ohio State University College of Optometry, expressed concerns that when funding for research is cut, there is a human element that is affected as well, at all levels from researchers to technicians to students, who will gravitate towards other endeavors where funding does exist. “Then the human capital is lost,” she said.

James Tsai, M.D., president of New York Eye and Ear Infirmary of Mount Sinai and a fellow panelist described the ripple effect of insufficient federal support for research. “We need the seed research funding to create opportunities for industry to come in,” he said. “The industry wants to see that basic research validated before they invest.”

The panel closed by emphasizing the importance of educating Congress and the general public about eye health in particular that newer treatments can reduce the cost and prevalence of eye disease over time.

“We all have to take up the educational sword,” said Zadnik.